Last night we had company over and shared this meal with them.  Their little daughter kept requesting the chicken. There really is chicken in this fajita.  I was in a hurry while taking the photo and realized later it wasn’t really visible.

I remember my mom making this and everyone in the family enjoying it.  The marinade itself is easy and you can add as many sides as you want.  You can half everything in the recipe if you only want to use 1 1/2 pounds of chicken.

Cut chicken into thin strips.  Mix all ingredients in the marinade and pour over chicken.  Marinade for at least 15 minutes, but I marinated it for about 7 hours.

While chicken is marinating, prepare other toppings.

Slice one onions, one red pepper and one green pepper and saute them on the stovetop in 2-3 T. oil.  (I used 2 onions, 4 red peppers, and 2 green peppers because we had several people over for dinner and I wanted to have plenty.)

While those are cooking, cook chicken in a separate covered pan with marinade until chicken is cooked thoroughly (white all the way through- about 20-25 minutes).

Notes:  I put the rice in the rice cooker ahead of time and had the beans in the crockpot all day.  About an hour before serving, I added a dash of garlic powder, 1-2 tsp salt, and a handful of chopped cilantro to the beans and allowed it to continue cooking.

To make preparation faster in the evening, I chopped the spinach and vegetables and such in the morning so that all I had to do at the end was toss the onion/pepper mixture and the chicken mixture into their pans and cook them.

I toasted the corn tortillas in a pan for a few minutes to make them pliable. 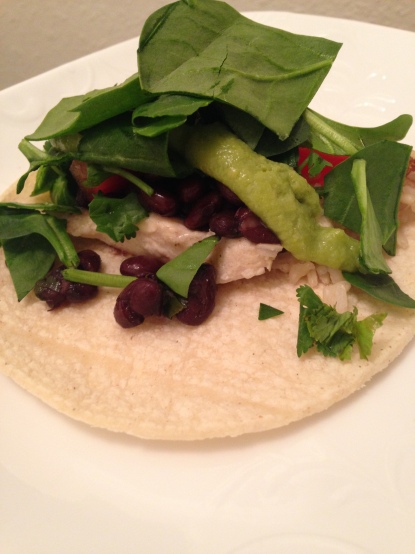 A glimpse of the chicken. 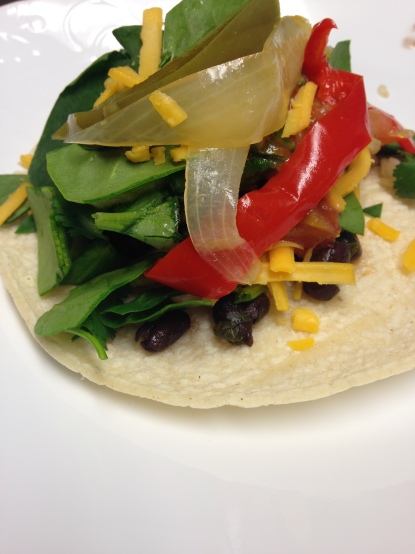 With peppers and cheese.